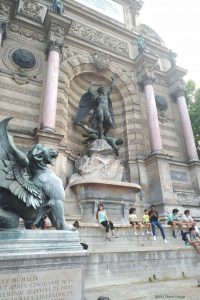 One of the most famous public squares in Paris is Place Saint- Michel found on the borderline between the fifth and the sixth arrondissements, facing the Ile de la Cité. It is linked to the Ile de la Cité by the bridge of the same name, Pont Saint –Michel.

The square was built under Napoleon III in 1855 at the same time the Boulevard St Michel was being developped. The monumental fountain which adorns the square was constructed by Gabriel Davioud between 1855 and 1860. Nine major sculptors also participated in this prestigious work. 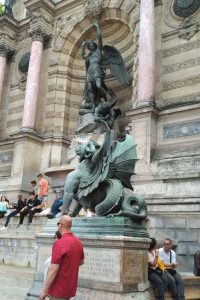 It’s an impressive 26 metres high (the highest fountain in Paris) and 15 metres wide, with an ancient style Arc de Triomphe and 4 marble Corinthian columns. The central figure of the fountain was originally supposed to depict Napoleon Bonaparte, but this idea was soon rejected by opponents of Napoleon III. The city council wanted to go back further in time and pay homage to the old chapel of Saint –Michel en la Cité. Ultimately it is the struggle between good and evil that is depicted – The Archangel Saint Michel vanquishing the Devil. On either side are 2 dragons spouting water into the fountain and above can be seen 4 smaller statues of the classical cardinal virtues – Prudence, Temperance, Fortitude and Justice.

Also at Place St Michel you can read marble plaques which commemorate the many students who died in Paris in 1944 fighting against the Nazis. 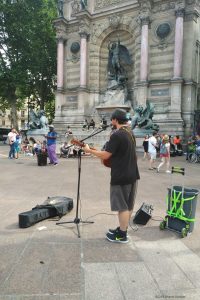 How to find Place Saint – Michel:

From the Hotel it’s a 5- minute walk away, just keep walking down Boulevard
Saint Michel and it’s on the left hand side across from the entrance to Saint –Michel metro station. 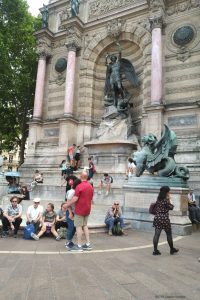 Place Saint-Michel is one of the key meeting points for locals and tourists alike. It is a hive of activity and often you can hear buskers or be entertained by street performers while you are there. The majestic fountain is to be admired in its own right but also the square was a symbolic place for the resistance fighters . In more recent times it is where crowds gathered the day after the fire at Notre Dame Cathedral. Looking northwards from Place Saint-Michel you can see some of the other important monuments of the Ile de la Cité, such as Sainte-Chapelle and the Palais de Justice.